Update from Team Piersma in the East Asian – Australasian Flyway, 29 May 2017

Since last week the satellite-tagged birds from NW Australia are leaving their Yellow Sea staging sites where they have been during the past weeks. They are clearly headed to the breeding grounds and some seem to have arrived at their breeding sites.

Zooming in to the tracks shows the direction of birds leaving the Yellow Sea after some good fueling, we hope.

The breeding grounds in northern Russia are about 4,000 km from the Yellow Sea. The Bar-tailed Godwits were initially ahead of the Great Knots but they are catching up. The Red Knots are still in the south China Sea and Vietnam. 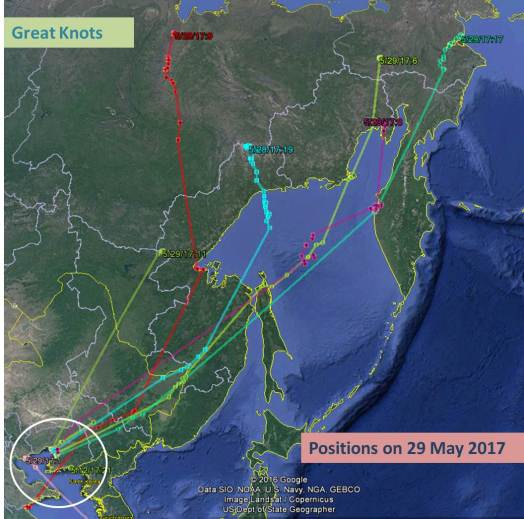 Interestingly, some Great Knots have made a stop in Russian (Kamchatka) estuaries on the way, while some seem to fly directly towards the tundra habitats where they breed. Obviously we need to analyse the tracks in detail before any conclusions can be drawn about individual strategies but the team is already pondering these questions.

Theunis Piersma is excited about stopover in the Kamchatka estuaries:

“Have a look at the Great Knots: two just south of Khairusova, and a third flying in!”. This is interesting because the Khairusova-Belogolovaya estuary is an important staging site for Great Knots during southward migration. (See the 2013 publication in Wader Study Group Bulletin, now Wader Study). 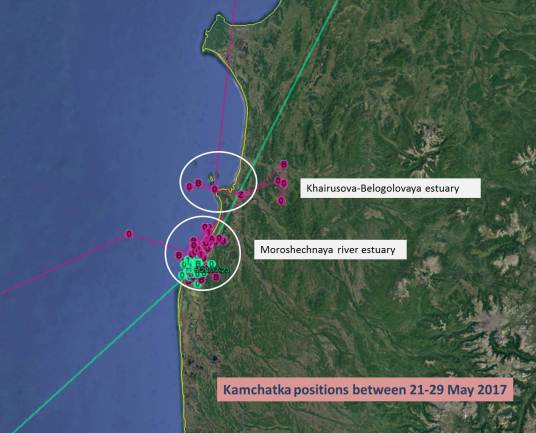 Dmitry Dorofeev (from All-Russian Research Institute for Environmental Protection and PhD student at Moscow State University) commented: “It is really interesting! Birds appear to stay in the Moroshechnaya river estuary. This estuary is rather close to Khairusova-Belogolovaya, but the area of mudflat is not very large. Totally there is about 15 km2 of mudflats. The size of mudflats in Khairusova-Belogolovaya estuary is about 45-50 km2.” We are still analyzing the data but it seems they have foraged there up to 5-6 days before going on straight to breeding grounds.

These are exciting days in our PTT study. Where will Great Knots from Kamchatka settle to breed? Are the Bar-tailed Godwits indeed settling outside the known breeding range?

We will keep you updated as the breeding season progresses.