Amalia is back in Africa! He is in Senegal, in the wetlands and rice fields of  the Casamance (see map).  Amalia is a satellite-tagged male Black-tailed Godwit who’s claim-to-fame is that we are now following him for four and half years!

He is carrying a transmitter since 2013, the longest of all godwits we track. He actually is a superstar in Friesland, The Netherlands, where his arrival each year is awaited and celebrated by the local community and school classes – including a contest to predict his arrival date. Through satellite tracking we are learning a lot about ‘our’ Godwits, and especially multi-years tracks such as from champion Amalia, are extremely valuable.

What was a nice development this year is that on 27 May 2017 Jos Hooijmeijer reported that Amalia was seen with very young chicks!. You can read about it here. He apparently found a mate and together they hatched a brood.

What happened to the precious brood Amalia was guiding in May?

Based on Jos’ visit in May we estimated that the laying date has been around 25 April . That is quite early and probably this was his first clutch in 2017. Jos again visited the breeding site of Amalia in Friesland on 9 June 2017, when the chicks would be about 20 days old.

Jos found Amalia only a few hundred meters from where he saw Amalia and his family on 27 May. Amalia’s mate was leading two or three chicks through a pasture grazed by horses and Amalia was sitting on a pole, a good lookout to watch over them.

The chicks were not captured and ringed, so we cannot say with 100% certainty whether they fledged or not. However, if indeed on June 9th there were two or three chicks that survived for 20 days, there is a fair chance that at least one will have survived for 25 days, to the age of fledging. 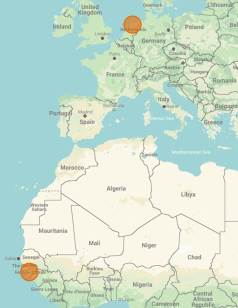 One of the last observations of Amalia in The Netherlands was on 15 July 2017. That day he was seen by Jelle Loonstra near the town of Jeth, in a group of nine adults and 12 recently fledged juvenile birds. Maybe one of more of these fledglings were his own chicks!

The next day, Amalia was still in Jeth, but he left soon after because on the 18th he had arrived in SE  England, in the estuary of the River Alde (NW of Ipswich). The same day he flew back to the mainland, to the Hoge Plaeten in de Westerschelde bij Breskens (The Netherlands).

From Breskens, he started his southward migration. On 20 July, he was in the vast “marais” wetlands south of Rochefort in Charente Maritime (France), a well-known stopover for Black-tailed Godwits, especially in spring. There he stayed until the end of July or early August (he was 10 days of the radar), to fly to the Casamance in southern Senegal where he arrives on August 12, as in previous years. He is not only faithful to his Friesian breeding area but also to his Senegalese wintering area.