I am a postdoctoral researcher at the Conservation Ecology Group, University of Groningen (Netherlands) and at the Department of Vertebrate Zoology at Lomonosov Moscow State University (Russia). I love working with Theunis for his rousing optimism, boundless thought and unique ability to mix interest, basic science and deep care about birds and environments in which they live.

Being undergraduate at the Lomonosov Moscow State University I was dreaming about Arctic expeditions and managed to go there for first time even before I started my Masters project. In 2000 Mikhail Soloviev took me to Taimyr tundra. I joined the annual monitoring of breeding shorebirds, the project he was running from 1994. With my MSc thesis and later PhD work I focused on the fundamental ecological relationship between common breeding waders and their environment – availability of food resources and nest site selection at different scales. In 2007 I finalized my thesis on ‘Spatial ecological patterns of distribution of waders (Charadrii) breeding in south-east Taimyr’. While working on Taimyr I never thought of a change happening there, I was describing basic principles of a static undisturbed system.

The wind of change came from the West, of course, soon after I attended the 2008 Wader Study Group conference in Poland and met Theunis and Yvonne Verkuil. Yvonne contacted me and asked whether I know what happens with Ruffs (Philomachus pugnax) in the Russian Arctic. After a look at the arcticbirds.net database, compiled by Mikhail and Pavel Tomkovich, we found that over the past years ruffs shifted from the European Arctic to Western Siberia. From here my project on Ruffs started. In 2010, with financial support from Global Flyway Network, together with Julia Karagicheva, Natalia Karlionova, Pavel Pinchuk, Alexander and Ekaterina Matsyna and Maxim Korolkov we went to Kalmykia to colour-mark Ruffs during spring migration. Birds were not there, but our trip initiated Ruff colour-marking in Russia, Ukraine and Belarus. 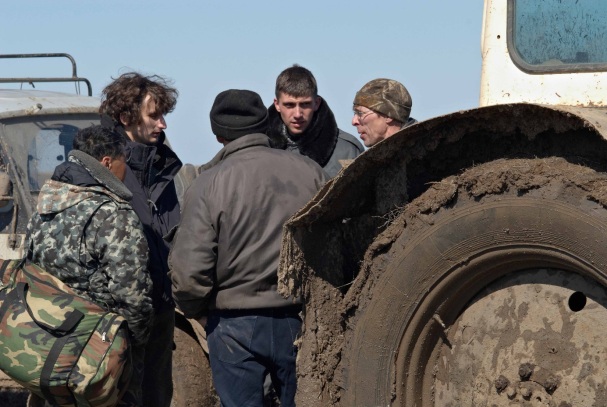 In 2009 at the Global Flyway Network workshop organized by Theunis on Texel, the Netherlands, I met his friend and collaborator David Winkler and in 2010 joined his lab at Cornell University, USA, as a postdoc. There I focused on Tree swallows Tachycineta bicolor, small aerial feeders, which bred in nest boxes put up by Wink everywhere around Ithaca. Wink opened my eyes on demography, movement ecology, animal tracking and citizen science. I had to learn a lot there and with his support after two years obtained many skills necessary for my current work.

I would have stayed longer there if Theunis would not called me back to Europe. In 2012 I joined his group at the Royal NIOZ, in the Netherlands as a postdoc on METAWAD project. There I focused first on Red Knots Calidris canutus and their survival responses to cockle dredging and then on the Bar-tailed Godwits Limosa lapponica. Having slowly realized how dynamic our environment is and how fast and flexible are birds in their adjustments to the environmental changes I looked back at my old Taimyr data. Indeed Taimyr has changed strongly over the period I have been there and godwits did too.

Being impressed by the environmental changes I observe and concerned about the nearest future of migratory birds I am working now to describe the means that birds have for adaptation and to search for solutions that would keep them present in the new and warm world.

You can view my publications at my profiles on ResearchGate, Google Scholar, GitHub, the Moscow State University and the NIOZ.