The Stoarmrin was to be a marsh through the Dutch-Frisian landscape, which ecosystem values are at stake, as is true for many landscapes in Europe. The idea is very similar to the People’s Walk for Wildlife held in London this year. A positive message of concern, with people marching dressed as their favorite flower or animal;  in our collective consciousness similar ideas were born. Chris Packham was so kind to sent an inspirational video:

And the Storming for Biodiversity did happen! On Sunday 28 October – in weather that was a lot more lovely than was anticipated with the stormy title. On a chilly but sunny Sunday a few 100 people, and one royal godwit on his carriage, embarked on a 9 km walk around the Frisian town of Burgwerd.

The participants were an eclectic mix of adults, children, artists, scientists dressed colorfully as animals, or simply in boots and a pink skirt – which symbolized hope for a better future for plants, insects and birds.

The march did not make it to Guardian (see below), but was covered on the front page of the regional Leeuwarder Courant. We hope this will be the start of a series of Walks for Wildlife next year. In The Netherlands we are dreaming up a large march eventually gathering at the seat of government in The Hague, so the royal godwit can deliver our own people’s Manifesto for Wildlife. 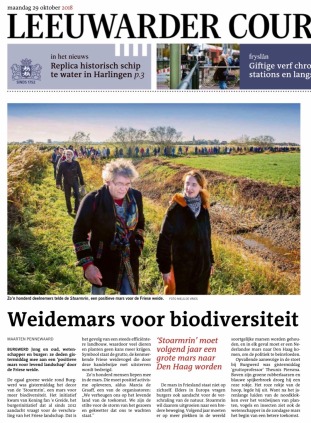 Other Walks for Wildlife in Europe

The London People’s Walk for Wildlife took place on Saturday 22 September initiated by Billy Bragg and Chris Packham. The Guardian reported how that day thousands peacefully marched in London to demand the government invests in wildlife-friendly policies and swiftly reverses the decline of British ecosystems. Read more here: https://www.theguardian.com/environment/2018/sep/22/hundreds-march-on-whitehall-to-call-for-end-to-war-on-wildlife.

The best way to find raptors is to observe their prey. As soon as a shorebird tilts its head to point one eye up, a raptor must be looming overhead. Their skills in detecting predators exceed those of the best birder — after all, their life depends on their attentiveness. That is why scanning behaviour is commonly used as a reliable indicator of the danger level that animals perceive.

But, how reliable is it really? How do we know what a bird is really looking at?

My first doubts come up in Chile, in 2005. At midday we drive through the sweltering desert of Atacama. A carpet of salt crystals stands out against a bluegreen lake where flamingos are slobbering crustaceans. The sky is clear blue. The white clouds in the distance turn out to be the snowy peaks of the Andes.

Sure enough, there is a shorebird on the salt. It is a Baird’s Sandpiper (Calidris bairdii), and it is alone. The bird is not shy; we can even see that it is eating little white critters, probably amphipods. As I come even closer to take pictures the bird starts tilting its head several times as if scanning the sky overhead. I look up to seek for the raptor. There is none.

A little further down we see another loner on the salt plains: a Puna Plover (Charadrius alticola). Likewise, the plover is not shy, and as I approach to make pictures, this bird also tilts its head, just as the Baird’s did. Again, not a bird in the sky. I’m confused.

These observations linger in my head for some time, until Graham Martin, the King of Bird Vision, visits our institute. I bombard him with questions and pictures: Would the birds really look at the sky overhead? Could they be looking at me instead? Does the bright sunlight have something to do with it?

It is likely that the bird sees me as a predator. By scanning the sky, he may be anticipating his chances: if I decide to flee for this ground predator, could I be intercepted by an attacker from the sky?

However, birds can also keep their head tilted for another reason, explains Graham. Just like us, birds have a pecten oculi, the organ that causes the famous blind spot in the field of vision. This organ ensures that the retina receives sufficient nutrition. In birds, the organ may have yet another function: its dark dyes and velvety structure ensure that incoming light is strongly absorbed. By turning their heads, birds could make sure that the bright sunlight falls right on the pecten. As a result, they can reduce glare in the eye and prevent being temporarily blinded by the sun. Calculations by Graham confirmed that the head positions of the photographed birds were appropriate for his effect to occur. We published our ideas, thereby explicitly acknowledging that our sample size is only two (van den Hout & Martin 2011, Wader Study Group Bulletin 118: 18-21).

Since then I have been keen on trying to find out whether more birds exhibit such scanning behaviour in a predator-free context. And indeed, I observed and photographed several more scanning events, both from the northern and southern hemisphere, that could clearly not be connected to a raptor flying overhead. The pictures are shown below.

Like with the Atacama birds, it appeared that all pictures were taken around midday (and this was not planned!), when the sun was high in the sky. These observations seem consistent with the idea that by tilting their heads, the birds prevent disability glare from the sun, as in our 2011 paper. Although these observations do not conclusively solve our scanning issue, it makes the matter all the more intriguing, and compelling to solve.

Almost everyone knows that eating seafood (or a pizza!) makes you thirsty. Seafood is naturally salty and when you have too much sodium the body makes you drink more water to balance the fluids in your cells. Excess sodium and water is filtered out as urine allowing the body to return to equilibrium. Though a sensation of ‘thirst’ is thought to be rather similar among the higher vertebrates, not all of them have powerful kidneys like ours and access to freshwater to carry off the excess salts.

In fact, many species of birds – whose kidneys work much less efficiently than those of mammals – feed in salty environments for most of their lives with limited or no access to freshwater at all. To cope with the salt these birds have a clever trick up their sleeves, or rather on the top of the skull. They have cephalic ‘salt’ glands that extract salt ions from the bloodstream and produce a salt-loaded liquid that is discarded through the nostrils – excreted salt may be visible as ‘water’ drips off the tip of the beak. But this poses another problem: salts are pumped out against the concentration gradient and this takes energy. That’s why birds keep their salt glands as small as they can.

Mollusc-eating birds like red knots eat seawater-packed meat packaged in a shell. Getting rid of excess salt is a challenge as they have to process several times their body mass in seawater each day with no access to freshwater in their main wintering areas in West Africa. Jorge S. Gutiérrez and Theunis Piersma of the NIOZ Royal Netherlands Institute for Sea Research investigated how salt content and freshwater availability influenced food choice in red knots presented with relatively low-salt (Dutch-like) or high-salt (African-like) mud snails.

Impressed by the birds’ ability to choose the low-salt snails during the first trials, the duo went on to scrutinise the birds’ salt glands. By using a non-invasive approach consisting of sliding a finger across a smooth plate prepared with increasing thicknesses that may match those of the saltglands, Gutiérrez blindly scored the saltglands. ‘Initially, I felt their saltglands and notice they were tiny…because they had been eating trout pellets [with low-salt content] with freshwater at will in the lab for weeks’. Gutiérrez and Piersma were also impressed to see that once the freshwater was cut-off, the birds’ saltglands started to swell up and their preference for low-salinity snails eventually disappeared.

So, it seems that birds choose low-salinity prey when they have to. That marine birds could keep track of their salt intake was recently suggested by Jianzhi George Zhang of the University of Michigan in Ann Arbora, who showed that that penguins have evolutionary lost receptors for detecting sweet, umami, and bitter tastes, but still possess those for detecting saltiness (Current Biology 25(4) R142). There is a wide range of situations where a bird can’t afford to lose water. Such behavioural flexibility is rather relevant at a time when fluctuating temperatures and salinity conditions predicted under various climate change scenarios will affect the options open to birds and other aquatic air-breathing vertebrates such as sea turtles, snakes, and mammals.