Thesis: On 2 June 2017 Thomas Oudman has defended his thesis about the ecology of Red Knots at Banc d’Arguin, Mauritania. See NIOZ blog in Dutch. The complete list of theses on Red Knots you find below. 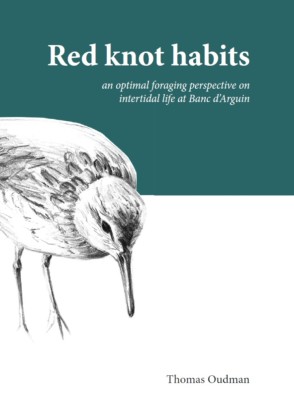 Overview of our research on Red Knots

In 1998 the shorebird group of the Royal Netherlands Institute for Sea Research (Royal NIOZ) launched a colour-ring program for Red Knots. Since the late eighties Red Knots has been studied by our research group which is based on the island of Texel in the Dutch Wadden Sea. We work on two subspecies Calidris canutus islandica and C. c. canutus co-occuring in the Wadden Sea but with contrasting flyways (Fig. 1): islandica migrates from the Nearctic to temperate wintering areas in NW Europa, canutus breeds on Paleoarctic tundras and migrates to the (tropical) coasts of western Africa.

By August 2015, 7188 Red Knots were captured and provided with colour-rings in the Dutch Wadden Sea, 2753 birds at the Banc d’Arguin in West Africa (Mauritania), 133 in the Wadden Sea of Schleswig-Holstein (Germany), 408 along the Atlantic coast of France and 21 in southern Portugal. Since then approximately 500 Red Knots were colour-ringed annually in the Netherlands and 200 in Mauritania. From 2015 onwards, Red Knots have been also be colour-ringed (again) on the mudflats in the vicinity of La Rochelle in southern France.

The colour ring combination consist of four colour-rings and a flag (a ring with a kind of streamer). There are two colour-rings on each lower leg (tarsus) with the flag in one of eight possible positions (Fig. 2). The flag colours that have been used since 1998 are shown in Fig. 3 and are (in chronological order): Yellow (Y), Red (R), Green (G), Lime (L) and black (N). Each bird also carries a metal ring, which is not part of the colour combination. In most cases the metal ring is on the upper leg (tibia), the flag can also be on the tibia, but never a colour-ring!

Since 2011, black flags are used in combination with four colour rings. The colours used are black (shorthand N in accordance with international agreements for colour ringing), Red (R), Yellow (Y), Green (G) and Pale blue (P). To give an example: a Red Knot with a green over a yellow colour-ring on the left leg, a black flag on the right upper leg and two pale blue rings on the lower leg is quoted as N2GYPP. First, the colour and position of the flag is noted and then the colour-rings from top to bottom, first for the left leg (of the bird) and then for the right leg.

In the early years of the study our colour-rings were made of a plastic named Darvic. However, currently we are using a different material that has the properties of Plexiglas. These rings do not have eternal life and their life-span is often shorter than the lifespan of a Red Knot. This means as a result of ring loss incomplete combinations exist. Furthermore some rings may be strongly faded as a result of ultraviolet light. Importantly, we would like to receive your observations of birds with incomplete colour-ring combinations, so we can estimate the amount of ring loss.

Observations of Red Knots can be sent to shorebirds@nioz.nl describing the colour-ring combination, the observation date and location. Additional to (1) date and (2) location we would like to receive your notes about (3) type of terrain and (4) flocks size. If possible please also add the following: (5) ring density – the number of colour-ringed individuals and the total number of observed birds, and (6) plumage description – summer or winter plumage; if possible expressed as a percentage.

Our study of individually marked Red Knots has provided us with a wealth of information a broad range of subjects: drivers of demography and  annual survival, feeding ecology, predator-prey interactions, spatial use and trophic interactions in the Dutch and German Wadden Sea and on the Banc d’Arguin in Mauritania.

A highlight in 2016 was our Science paper: Body shrinkage due to Arctic warming reduces red knot fitness in tropical wintering range by van Gils and co-authors.

Since 1998 our studies of the individually marked Red Knots have featured in the following (selection of) dissertations from PhD students in the NIOZ shorebird group. They all graduated at the University of Groningen: http://www.rug.nl/research/gelifes/education/dissertations.

2011 Jutta Leyrer: Being at the right place at the right time. Interpreting the annual life cycle of Afro-Siberian Red Knots 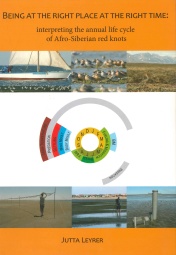 2015 Allert I. Bijleveld: Untying the knot. Mechanistically understanding the interactions between social foragers and their prey

2016 Jim de Fouw: Bottom-up and top-down forces in a tropical intertidal ecosystem; the interplay between seagrasses, bivalves and birds